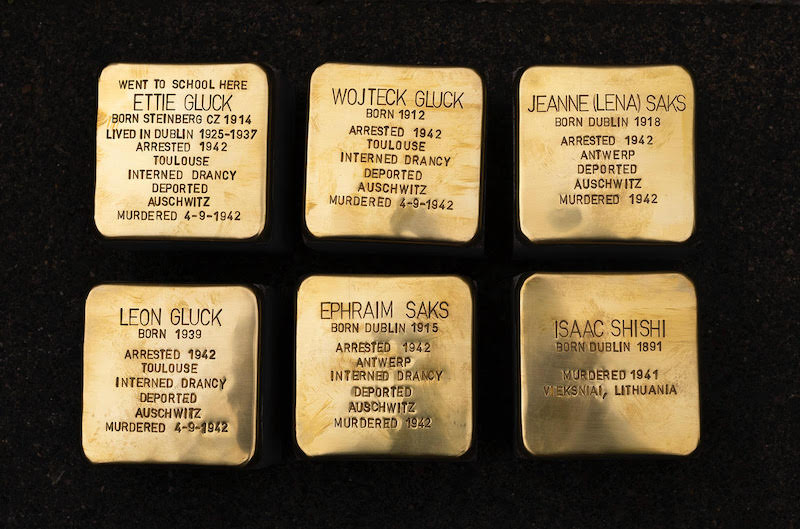 Two circumstances, namely the small number of Jews in Ireland in the twentieth century, together with the Irish government’s complex attitude to its own professed neutrality during the Second World War, mean that Ireland tends not to be associated with the loss of its citizens during the Holocaust. However, it is important to note the tragic and arguably avoidable loss of Irish Jewish lives during this calamitous time.

The Stolpersteine Project was initiated by artist Gunter Demnig in 1992, to commemorate victims of the Holocaust. It has become the world’s largest decentralised memorial, with over 90,000 ‘stumbling stones’ laid in 27 countries. The stones themselves are small square-setts, discreet and easily overlooked, a fitting analogy to Ireland’s few and mainly forgotten Holocaust victims. On June 1st, 2022, six Stolpersteine were embedded in the pavement outside St Catherine’s National School, Donore Avenue, in an area of Dublin frequently linked with its Jewish community in the early to mid-twentieth century. This site was chosen to honour the memory of Esther Steinberg, a former student, together with her husband, infant son, and three others with strong Irish connections.

Holocaust Education Ireland will host this talk which aims to provide an overview of the lived experience of Dublin’s Jews during the war years, as well as outlining biographical information regarding Esther Steinberg and the other Irish Jewish victims. Finally, it will raise questions regarding the Irish government’s attitude towards Jews and European Jewish refugees during the 1930s and 1940s, and will speculate as to the moral culpability regarding the death of Esther Steinberg at Auschwitz in September 1942.

Dr Melanie Brown has lectured in the School of History and Humanities, Trinity College, Dublin for several years, and is a Senior Examiner at the Royal Irish Academy of Music. Her main research interests include Irish Jewish history; identity politics in respect of ethnic and cultural minorities in Ireland; and the role of liturgical music in religious and cultural identity. Dr Brown is a board member of Holocaust Education Ireland.

*This event is now FULLY BOOKED