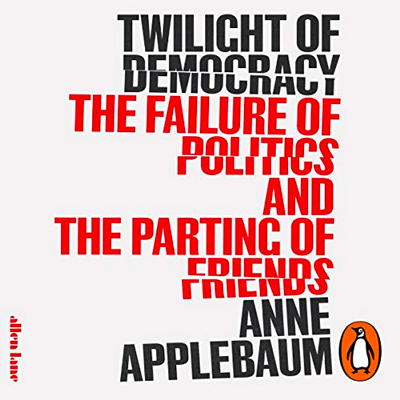 In the years just before and after the fall of the Berlin Wall, people from across the political spectrum in Europe and America celebrated a great achievement, felt a common purpose and, very often, forged personal friendships. Yet over the following decades the euphoria evaporated, the common purpose and centre ground gradually disappeared, extremism rose once more and eventually – as this book compellingly relates – the relationships soured too.

Anne Applebaum traces this history in an unfamiliar way, looking at the trajectories of individuals caught up in the public events of the last three decades. When politics becomes polarized, which side do you back?

In this episode Anne Applebaum returns to the Festival to talk about her book Twilight of Democracy: The Failure of Politics and the Parting of Friends. Anne is in conversation with Paschal Donohue, TD, Ireland’s Minister for Finance and President of the EuroGroup. The questions are asked by Deputy City Librarian Brendan Teeling, and the episode was recorded via Zoom on the 3rd October 2021.

This website uses cookies to improve your experience while you navigate through the website. Out of these, the cookies that are categorized as necessary are stored on your browser as they are essential for the working of basic functionalities of the website. We also use third-party cookies that help us analyze and understand how you use this website. These cookies will be stored in your browser only with your consent. You also have the option to opt-out of these cookies. But opting out of some of these cookies may affect your browsing experience.
Necessary Always Enabled
Necessary cookies are absolutely essential for the website to function properly. These cookies ensure basic functionalities and security features of the website, anonymously.
Functional
Functional cookies help to perform certain functionalities like sharing the content of the website on social media platforms, collect feedbacks, and other third-party features.
Performance
Performance cookies are used to understand and analyze the key performance indexes of the website which helps in delivering a better user experience for the visitors.
Analytics
Analytical cookies are used to understand how visitors interact with the website. These cookies help provide information on metrics the number of visitors, bounce rate, traffic source, etc.
Advertisement
Advertisement cookies are used to provide visitors with relevant ads and marketing campaigns. These cookies track visitors across websites and collect information to provide customized ads.
Others
Other uncategorized cookies are those that are being analyzed and have not been classified into a category as yet.
SAVE & ACCEPT
The Hitler Years ~ Disaster 1940-1945House of Glass: The Story and Secrets of a Twentieth-Century Jewish Family