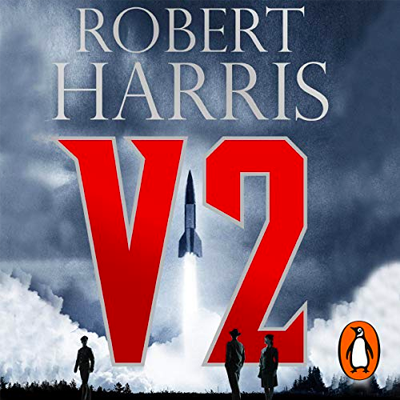 On the brink of defeat, Hitler commissioned 10,000 V2s – ballistic rockets that carried a one-ton warhead at three times the speed of sound, which he believed would win the war.

Dr Rudi Graf who, along with his friend Werner von Braun, had once dreamt of sending a rocket to the moon, now finds himself in November 1944 in a bleak seaside town in Occupied Holland, launching V2s against London. Kay Caton-Walsh, an officer in the WAAF, has experienced first-hand the horror of a V2 strike. When 160 Londoners, mostly women and children, are killed by a single missile, the government decides to send a team of WAAFs to newly-liberated Belgium in the hope of discovering the location of the launch sites. But not all the Germans have left and Kay finds herself in mortal danger.

In this episode best-selling author Robert Harris returns to the Festival to talk about his book V2, the story of the deadliest rockets of the Second World War. The episode is moderated by journalist and broadcaster Edel Coffey and was recorded via Zoom on the 27th September 2020.

This website uses cookies to improve your experience while you navigate through the website. Out of these, the cookies that are categorized as necessary are stored on your browser as they are essential for the working of basic functionalities of the website. We also use third-party cookies that help us analyze and understand how you use this website. These cookies will be stored in your browser only with your consent. You also have the option to opt-out of these cookies. But opting out of some of these cookies may affect your browsing experience.
Necessary Always Enabled
Necessary cookies are absolutely essential for the website to function properly. These cookies ensure basic functionalities and security features of the website, anonymously.
Functional
Functional cookies help to perform certain functionalities like sharing the content of the website on social media platforms, collect feedbacks, and other third-party features.
Performance
Performance cookies are used to understand and analyze the key performance indexes of the website which helps in delivering a better user experience for the visitors.
Analytics
Analytical cookies are used to understand how visitors interact with the website. These cookies help provide information on metrics the number of visitors, bounce rate, traffic source, etc.
Advertisement
Advertisement cookies are used to provide visitors with relevant ads and marketing campaigns. These cookies track visitors across websites and collect information to provide customized ads.
Others
Other uncategorized cookies are those that are being analyzed and have not been classified into a category as yet.
SAVE & ACCEPT
House of Glass: The Story and Secrets of a Twentieth-Century Jewish FamilyDead Famous: An Unexpected History of Celebrity