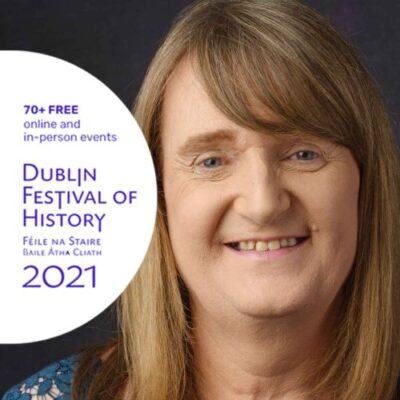 Across the island of Ireland, much work has been done to collect and share the stories of LGBTQ+ lives. This panel brings together practitioners who have worked on LGBTQ+ in public history to discuss their work – from grassroots projects to archives and museums.

Sara R Phillips is a Trans activist working globally. She has been involved with trans activism for over 25 years. She is currently in her 9th year as Chair of the Board of Directors of Irelands national trans organisation, Transgender Equality Network Ireland (TENI). She is the founder, researcher and archivist of the Irish Trans Archive.

Sara was one of the lead negotiators to the Gender Recognition Act 2015 and served on the Governmental review of the act in 2018.

Sara was honoured as Dublin LGBTQ Pride Grand Marshall in 2018. Sara is also a board member of the National Women’s Council of Ireland, the Treasurer of both the International Trans Fund in New York and Transgender Europe in Berlin.

Dr Richard O’Leary is a Visiting Scholar in History at Queen’s University Belfast and a professional storyteller.  He was the Coordinator of the Northern Ireland LGBT Heritage Project until May 2021. Richard has decades of experience as a gay activist and as an academic but in recent years he has focused on sharing stories of LGBTQ+ history  through live oral performance storytelling. His latest solo show, commissioned by the Outburst Queer Arts Festival,  is due to open at the MAC theatre, Belfast in mid November 2021 and is provisionally titled ‘My Queer History of Northern Ireland’.

Dr Maurice J Casey is the Historian in Residence at EPIC The Irish Emigration Museum and the Irish Department of Foreign Affairs. He is the curator of Out in the World: Ireland’s LGBTQ+ Diaspora, an exhibition running until December 2021 at EPIC in the CHQ building. He completed his PhD in History at the University of Oxford in 2020.

Kate Drinane has been part of the Education Team at the National Gallery of Ireland for eight years. She has introduced and developed LGBTQIA+ programming at the Gallery, including the management of OUTing the Past: Festival of LGBT History in Dublin 2019. Kate is the co-founder of the Queer Culture Ireland.

This website uses cookies to improve your experience while you navigate through the website. Out of these, the cookies that are categorized as necessary are stored on your browser as they are essential for the working of basic functionalities of the website. We also use third-party cookies that help us analyze and understand how you use this website. These cookies will be stored in your browser only with your consent. You also have the option to opt-out of these cookies. But opting out of some of these cookies may affect your browsing experience.
Necessary Always Enabled
Necessary cookies are absolutely essential for the website to function properly. These cookies ensure basic functionalities and security features of the website, anonymously.
Functional
Functional cookies help to perform certain functionalities like sharing the content of the website on social media platforms, collect feedbacks, and other third-party features.
Performance
Performance cookies are used to understand and analyze the key performance indexes of the website which helps in delivering a better user experience for the visitors.
Analytics
Analytical cookies are used to understand how visitors interact with the website. These cookies help provide information on metrics the number of visitors, bounce rate, traffic source, etc.
Advertisement
Advertisement cookies are used to provide visitors with relevant ads and marketing campaigns. These cookies track visitors across websites and collect information to provide customized ads.
Others
Other uncategorized cookies are those that are being analyzed and have not been classified into a category as yet.
SAVE & ACCEPT
George III: The Life and Reign of Britain’s Most Misunderstood Monarch – Andrew Roberts in Conversation with Lisa Marie GriffithIf Ever You Go To Dublin Town – Kathryn Milligan and Nicola Pierce in Conversation with Donal Fallon