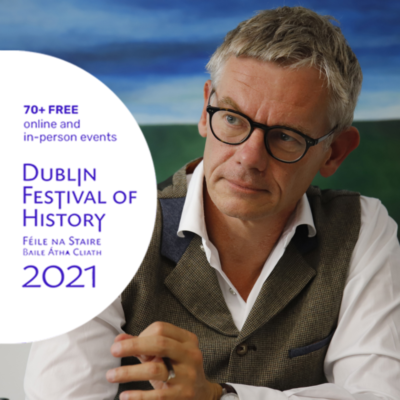 Subscribe to the Dublin Festival of History Podcast on Spotify, Audible, or your preferred platform.

In the annals of the Third Reich, little has been said about the role played by the German nobility in the Nazis’ rise to power. Nazis and Nobles now fills this gap, providing the first systematic investigation of the role played by the nobility in German political life between Germany’s defeat in the First World War in 1918 and the consolidation of Nazi power in the 1930s.

As Stephan Malinowski shows, the German nobility was too weak to prevent the German Revolution of 1918 but strong enough to take an active part in the struggle against the Weimar Republic. In this skilful portrait of an aristocratic world that was soon to disappear, Malinowski gives us for the first time the in-depth story of the German nobility’s social decline and political radicalization in the inter-war years.

Stephan Malinowski teaches Modern European History at the University of Edinburgh. Born and raised in Berlin, he is one of Germany’s leading experts on the history of the German nobility in the 20th century.

Robert Gerwarth is Professor of Modern History at UCD and Director of its Centre for War Studies.

This event was organised in collaboration with the Holocaust Education Trust Ireland.

This website uses cookies to improve your experience while you navigate through the website. Out of these, the cookies that are categorized as necessary are stored on your browser as they are essential for the working of basic functionalities of the website. We also use third-party cookies that help us analyze and understand how you use this website. These cookies will be stored in your browser only with your consent. You also have the option to opt-out of these cookies. But opting out of some of these cookies may affect your browsing experience.
Necessary Always Enabled
Necessary cookies are absolutely essential for the website to function properly. These cookies ensure basic functionalities and security features of the website, anonymously.
Functional
Functional cookies help to perform certain functionalities like sharing the content of the website on social media platforms, collect feedbacks, and other third-party features.
Performance
Performance cookies are used to understand and analyze the key performance indexes of the website which helps in delivering a better user experience for the visitors.
Analytics
Analytical cookies are used to understand how visitors interact with the website. These cookies help provide information on metrics the number of visitors, bounce rate, traffic source, etc.
Advertisement
Advertisement cookies are used to provide visitors with relevant ads and marketing campaigns. These cookies track visitors across websites and collect information to provide customized ads.
Others
Other uncategorized cookies are those that are being analyzed and have not been classified into a category as yet.
SAVE & ACCEPT
Birth of the Border: The Impact of PartitionThe Darkness Echoing: Exploring Ireland’s Places of Famine, Death and Rebellion – Gillian O’Brien in Conversation with Michael Staunton